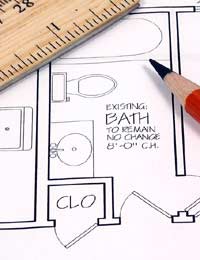 Mike Mills used to use his basement as a study. Then when his household grew unexpectedly larger, he decided to convert the space into an extra bathroom.

“I have a small terraced house of the sort that used to be described as a “two up two down.” It is a pretty place in quite an attractive row, on the outskirts of the city. You come in through the front door and immediately find yourself in the sitting room - that leads to the bottom of the stairs, and then the dining room and kitchen on the back. Upstairs, there is a bedroom at the front then another at the back, with a bathroom adjoining.

I have lived in my house for about 15 years now, and until recently it suited me well. The addition of a small basement, accessed through what looks like a cupboard door under the stairs, gave me the space to create a small study and to work from home on occasion.

Then three years ago I met my girlfriend Amy. We began to spend increasingly more time together, and to discuss the possibility of moving into the same house. It was a nice idea, especially as I found myself getting on well with her son Daniel. I knew it would be a bit of a change but we were all keen on the idea.

The problem was that Amy’s apartment was not very large. It was also rented while my house was my own. The problem with my house was that the bathroom adjoined the master bedroom, which would mean Dan and any friends that stayed over would have to come trooping through in the night.

We considered our options. One possibility was to add a bathroom on to the back of the house, as a couple of others had done in the row. The problem with this was that the garden was tiny anyway and we were loath to lose any more of it.

Eventually I decided that the best thing would be to explore the possibility of converting the study in the basement into a small shower room and toilet, and to set up a work station at one end of the dining room. I was worried as there were no windows down there and I wasn't sure how it would work from a waste point of view but we decided to call in an expert. A plumber came to visit and after “tutting” and shaking his head for a while agreed that it would be possible.

He said our only option would be to have a macerator toilet. This was because the basement level was so low and the waste would need to be pumped up to the level of the sewerage pipes outside. He also said we would need a second pump to take the grey water from the shower and the hand basin up there too.

I was slightly anxious about the idea of having a macerator, as I know they can be temperamental but he stressed that as long as they were looked after properly and nothing was put down the toilet that should not be, it should be fine. He examined the boiler and decided it would take the extra pressure of the second shower and of a small radiator down there too.

Work began a few weeks later, and really the whole project was unproblematic. We installed the extra pump, the smallest size of shower, with sliding doors, to maximise space, a small hand basin, the toilet (with macerator fittings) and a towel rail radiator. A vent that took the air up and into the alleyway next to the house was also put in.

So far the new arrangement has worked well. We all use the bathroom during the day but during the night and early in the mornings Dan and any of his friends are the ones who really use it. Installing it down in the basement was the ideal solution to our problem and has made our house more saleable too, should we ever choose to move.

I Made My Loft Into an Artist's Studio: Case Study